CrossFit Richmond initially approached us to help them increase their search engine rankings, which at the time didn’t match their position as one of Melbourne’s premier CrossFit gyms. We identified that with a few tweaks to their site and technique in the management of their content, they should see dramatic increases in site rankings and relevant traffic, which were then achieved well beyond expectations over the next few months.

We were then asked to redesign and develop the entire site. The catalyst for the redesign was the relocation into a larger more impressive facility and a rebranding exercise.

The new site had to incorporate a structural redesign so that existing functionalities such as the timetable and workout results were still easily accessed by existing members, yet the homepage had to attract new enthusiasts and educate potential newbies to CrossFit and entice them to join.

A particular challenge was ensuring no data was lost in the transfer from the old to the new site, as existing members rely extensively on records of previous work outs etc. Using WordPress plugins for data management, this was done without a hitch upon going live with the new site. 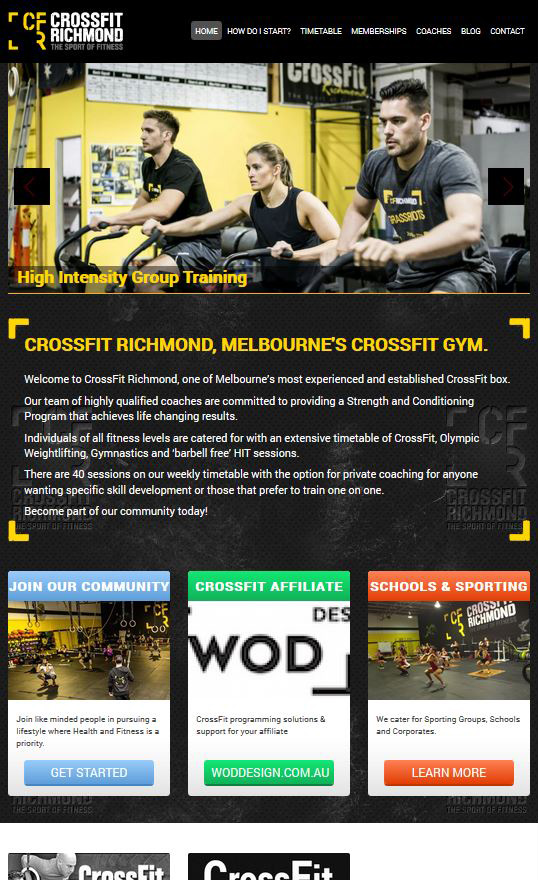 Yarra Web produced a fantastic looking website for us.

As we manage and update our website information daily, it is important to us that our website it functional and easy to use.

Pat worked with us closely to ensure that all the dimensions of our online marketing presence was there. He also was only a phone call away after we went live and helped us smooth out a couple of early kinks efficiently and timely.

Even now after 3 months after our website went live he has assisted us with small issues that have arisen, he has been always such a dependable service provider and I would not hesitate to recommend him to anyone wanting a revamped or new website.

I would not hesitate to recommend him to anyone wanting a revamped or new website.

Feel free to contact us
and ask any questions